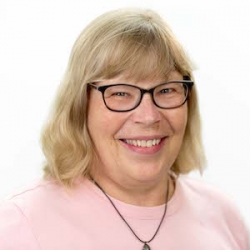 Miriam A. Smith, J.D., M.A., teaches in the areas of media law, media management and economics, media ethics and mobile media. Her words circle the globe. She's been published in the U.S. and China and quoted in U.S. and European media.

Miriam A. Smith, J.D., M.A. Comm. Mgmt., is an Associate Professor in Broadcast and Electronic Communication Arts at San Francisco State University where she teaches in the areas of media law, media management and economics, media ethics and mobile media. Her words circle the globe. Miriam has been published in the U.S. and China (Internet law) and quoted in U.S. media (various media topics), Swiss radio (public broadcasting) and in Polish magazines (the business of media). She has taught in Switzerland (media law) and Germany (media management) and lectured in Jordan (media law), Brazil (music law), Russia (Internet governance) and China (the U.S. television industry). In 2004, she received a Fulbright to study visual culture in Germany.

A frequent presenter at the national Broadcast Education Association (BEA), Miriam is a past chair of their Law & Policy Division. She presently serves as a general and media advisor to the international folk festival performance ensemble, Clog America, and as a volunteer public affairs specialist in electronic media for the Church of Jesus Christ of Latter-day Saints in the San Francisco Bay Area. She is also a member of the San Francisco State Handbell Choir.

Miriam received an A.S. from the College of Eastern Utah, a B.A. in European Studies from Brigham Young University, a J.D. from the J. Reuben Clark Law School (BYU) and an M.A. in Communications Management from the Annenberg School for Communication, University of Southern California. Miriam is licensed to practice law in two states (and is quite dangerous in the other 48).