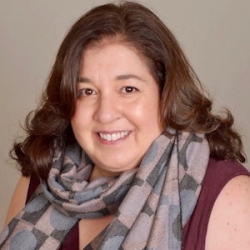 Melissa Camacho, Ph.D. has a deep interest in TV and international relations. She earned several degrees in Government and International Affairs and has worked for the U.N., the U.S. House of Representatives, and CNN.

Dr. Camacho has been a TV watcher since she was born. When she was three, she wanted to be Walter Cronkite. Growing up in Puerto Rico also increased her interest in international relations.

She has earned several degrees in Government and International Affairs, and has worked media-related offices in the United Nations, the U.S. House of Representatives, and CNN. She earned her Ph.D. in mass media from Michigan State University in 2001, an experience she survived by writing her dissertation on Law & Order.

In addition to her responsibilities as an associate professor at SF State, she is also a media reviewer for the non-profit organization Common Sense Media. When she's not teaching, writing about or reviewing television, she spends her time at the gym and traveling around the world looking for the ultimate hot chocolate.