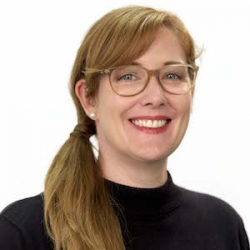 Both Zoom and in-person meetings require an appointment, which you can schedule up to two weeks in advance on Calendly; your confirmation email will have the Zoom info.

Professor Drennan teaches courses in scriptwriting for television, web series, and short-format audio and video, with a specialty in sitcoms and satire; writing for interactive media and videogames; and media theory/critical study of popular culture with a focus on the theories of Marx, Gramsci, and Adorno.

She is an advisor for the BECA Department and also for the Minor in Video Games Studies.