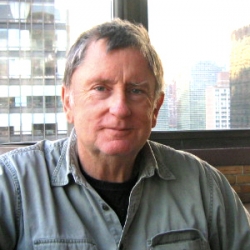 John Hewitt has been producing, editing and shooting documentaries for four decades. His films have been shown on PBS and commercial television and in film festivals throughout the United States.

His credits include: America’s Chemical Angels, the story of drug treatments for childhood ADHD; Landmines of the Heart, a probe into political reconciliation in Cambodia; A Passion for Horses, one woman’s drive to raise championship horses; Staying Lost (and found) in Bahia, exposing the tension between ex-pats and Mexicans in one small village; The Summers of the Amigos, exploring both sides of the work of international community development programs; and Tremors in Guzman, uncovering political unrest in a central Mexican city.

He taught documentary production at San Francisco State University and his textbook: Documentary Filmmaking: A Contemporary Field Guide (Oxford University Press, 2009), co-authored with University of California professor and documentarian Gustavo Vazquez, is used in universities throughout the United States.

John Hewitt is Professor Emeritus in the Department of Broadcast and Electronic Communication Arts at San Francisco State University.