Career Talk with Media Industry Professionals: Let’s Get Your Foot In the Door

If you want to know how to get your foot in the door and carve out a successful career in the media industry, feel free to join. Any BECA students are welcome to join. If you want to attend, contact Professor Jiyoung Cha at jycha@sfsu.edu.

Justin Lieberman is a recording engineer and producer with over two decades of experience. Justin has worked with hundreds of artist on over 150 commercially released albums including Santana, George Winston, Roy Hargrove, Jonathan Richman, David Gray, Alanis Morissette, Les Claypool, Jennifer Nettles, Jackie King, Willie Nelson, Kronos Quartet, Ralph Stanley, Bill Frissel, Rodrigo y Gabriella and many more. Justin has also worked on several films, television shows,  countless radio and television commercials and has recently been focusing his work on score mixing for video games such as the recent blockbusters Spider-Man: The City That Never Sleeps, The Last of Us Part II, Death Stranding and most recently the 2021 BAFTA Music of the Year winner Spider-Man: Miles Morales. Justin has received Gold and Multi-Platinum record awards from the RIAA for his participation in albums by Santana, George Winston and Lady Gaga. As a music engineer, mixer and content creator for Sony PlayStation, Justin is currently involved with the production of game scores with a focus on score mixing in addition to mixing game trailers and branding content for Web, TV and Theatrical campaigns.

Roy Lee is a film and television producer and founder of Vertigo Entertainment. Lee has an undergraduate degree from George Washington University and attended law school at American University. His first producer credit was for THE RING (2002), and from there he went on to produce many of the iconic American horror films of the past two decades including THE GRUDGE, THE STRANGERS, and IT. Lee also produced the beloved children's animated films THE LEGO MOVIE, and HOW TO TRAIN YOUR DRAGON. Currently, Roy is producing a diverse slate of popular video game adaptations, acclaimed-director-driven thrillers, television series at many of the major streaming services, and more horror films.

Siera Sinclair is a sound designer and composer, specializing in audio branding, interaction sound design, and audio experience design for mobile, AR/VR, and traditional mediums. For the last 5 years, Siera has led creative sound design strategy on projects at Meta, including Rayban Stories, Messenger Soundmojis, and the complete suite of Portal hardware experiences, including the groundbreaking AR audio work for Portal Storytime. Prior to working at Meta, Siera built up a portfolio as a freelancer working on feature films and doing contract work for many companies, including Google, PlayStation, and Electronic Arts. Siera also worked as a recording engineer and music editor for Grammy-award-winning pianist George Winston. She has a BA in Communications and an MFA in Music Production and Sound Design for Visual Media. 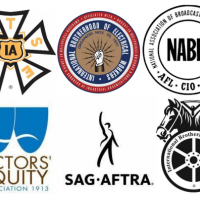 Labor Unions in the Entertainment Industry