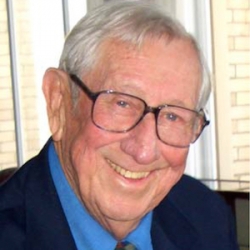 Stuart grew up in Fresno and was drawn to not only radio and film, but also the theatre, creating and performing in radio plays throughout high school. During WWII, he enlisted in the Navy, serving stints at Iwo Jima and taking part in the invasion of Okinawa. After the war, Hyde earned degrees from UCLA and Stanford, and he then began teaching.

He taught drama and broadcasting courses at City College of San Francisco, USC, and Stanford, before finally landing at San Francisco State as head of what would become the BECA department.

In addition to college, Stuart taught media performance courses pro-bono at San Quentin Prison for eleven years, and he says he learned from his students at San Quentin about the potential of audio and video as tools of change.

Students say Hyde genuinely enjoyed teaching, cared about his students, and was dedicated to their learning. Even in retirement, Hyde has kept in touch with former students to advise and counsel them.

In 1959, Hyde wrote his first book, Television and Radio Announcing, which has sold more than 150,000 copies and has undergone several updates and revisions. It continues to be a pivotal and important book in today’s learning environment. He also wrote Idea to Script, focused on writing for radio and television.

Hyde is a member of the Broadcast Legends and has also been inducted in to the Bay Area Radio Hall of Fame and the National Academy of Television Arts and Sciences Silver Circle.