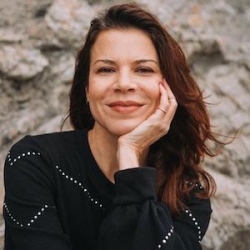 Cintya Chaves brings over 15 years of experience in the performing arts to San Francisco State University.  She has had a long career as an actress and producer in Brazil, working on stage with dramaturgical content from authors such as Eugene O’Neill, Anton Chekhov, William Shakespeare, among others.  In 2017 Cintya came to San Francisco to work as a voice recording artist for, among others, one of the largest technology companies in the world. She also records sleep stories in Portuguese for one of the most popular mindfulness apps, Calm, which has more than 100 million subscribers.  In 2019 Cintya started the graduate program in SF State’s BECA department and in her second semester she began offering voice performance workshops to students enrolled in BECA 350.  Throughout 2020 Cintya taught Media Performance online as a graduate teaching assistant (GTA).  Cintya is also a Yoga teacher having graduated in Brazil and has conducted classes in São Paulo, BR, Paris, FR, and San Francisco, CA over the past 15 years.  In her voice performance classes she includes Yoga concepts, as taught in traditional India practices, to help her students find their natural voice.  Cintya holds a Master of Arts in Broadcast and Electronic Communication Arts from SF State, as well as a B.A. in Performing Arts from the University of São Paulo, (Escola de Arte Dramática).  She teaches courses in voice-over performance, basic digital media, and Yoga at SF State and online in other colleges in Brazil such as the Célia Helena Center of Arts and Education (Célia Helena Centro de Artes e Educação).  She has just opened her voice-over business in Marin, CA called Luavo. When she is not otherwise working, you can find her recording in her home studio for personal projects such as her meditation podcast where she conducts short Yoga practices twice a week.  Above all, Cintya loves teaching and sharing voice performance and body awareness knowledge with students so they can find their voices in such a competitive industry.